Here's what travelers said 15 years ago...

Fifteen years ago, The Center for Spiritual Living began making spiritual pilgrimages with Spirit Tours to different places in the world to experience local spiritual cultures. Here, in the video below, is what travelers said back then. The testimonials in the video below are as true today.


Spirit Tours is celebrating their 15 year anniversary with an all-new itinerary back to the place where it all started, The Islands of the Gods, Bali. Dr. Edward will be presenting an ancient code of spiritual living, for a life of joy and fulfillment. the Yamas and Niyamas.


Check out www.spirit.tours for more information.

Whether you are a first time traveler or a repeat Spirit Tours pilgrim, isn't it time you went back to the Island of Smiles, the Island of the Gods, and revisit the magic of being immersed in spirituality with your community?

Murni, A Legend in Bali, and My Friend

My Balinese friend Murni is a legend. Not only for owning the famous restaurant Murni’s Warung, but also for being the first Balinese woman to drive a car in Bali. Murni married her husband Pat from Kansas at a time when marrying a westerner was frowned upon in Bali.

When I first visited Bali, Murni had already been a hostess for about 50 years. In 1974 she established a small restaurant just off the bridge at the north end of town in Ubud. It was the only restaurant in Ubud and became a meeting place for westerners who lived there.

My family lived up the hill from Murni’s Warung, and we would often go down for a late night snack or dessert. I remember walking down the dark roads where fireflies filled the sky, and the distant sound of flowing rivers or a gamelan orchestra accompanied us.

During durian season (a particularly interestingly smelling fruit) Murni and I would search town for the very best durian for a feast. We would take walks across the island from Ubud, walking to the monkey forest in Sangeh. On these walks, Murni would explain Balinese life to me. Being in her presence and basking in the beauty of her radiant smile was a treat.

Those were simpler days in Bali when all the tourists in town knew each other. Murni’s daughter, Morni, and my daughter, Gitana, became playmates, and Murni would visit our house in the hills for tea or enjoy one of the health treatment I was practicing at the time.

Murni is a gracious lady, and legend in Bali, but more importantly, she is my friend, and forever part of a fantastic, beautiful memory.

Ireland "Home is where the heart is" 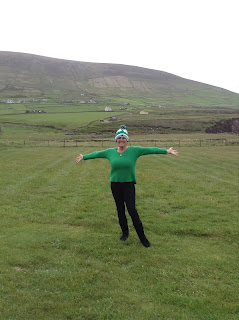 When I close my eyes I can still see the bright green rolling hills, I can still feel the wind carrying me across the land, and I can still hear the waves crashing upon the cliffs. This is Ireland the land that lies deep within me, the land that touches my soul like no other place I have ever traveled.

On this journey, we learned about Celtic Spirituality, and it is deeply rooted in the land that we walk upon. I learned that by writing poetry, I could free my mind of worry and sorrow, while all along bringing new joy into my life.

This pilgrimage brought me back to a place I had forgotten about, a place of innocence, dreams, and playfulness. I am counting the days until I return to the coast of Ireland where I can hear the music of the people, see the beauty of the land and walk on the green grass of my ancestors.

Ireland is everything they say it is and more. In May 2015 Spirit Tours took a group of pilgrims to the land of our family ancestors. During this journey I was once again reminded that “home” does not always have to be where you were born, it may just be “where the heart is”.

Have you ever traveled to a place that felt like home? 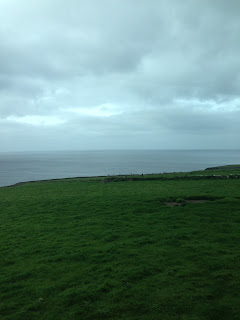 Seeing the world through the eyes of a novelist traveler

In my opinion traveling is the best education out there. My parents started taking me to various exotic, spiritual places at the age of six months old. Their need and desire to travel was instilled in my mind at a very young age. Its safe to say that due to the nature of my job as a travel guide and my past experiences traveling and living in different locations I have become a bit jaded. 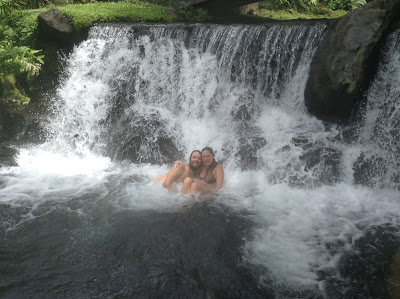 This all changed when my Fiancée started joining me on various Spirit Tours journeys around the world. According to him he has always had the desire to travel, however the opportunity never presented itself. In the past two years we have traveled together to Costa Rica, Sedona, Mexico and Bali. Each adventure in his eyes was so new and fresh. It made me re live the excitement of each place and appreciate each moment so much more. His excitement and amazing positive attitude while traveling allows me to see the world through the eyes of a novelist traveler.

Where have you traveled, and where do you still want to go? 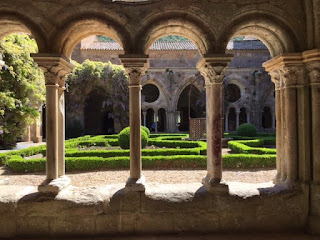 Going to France in April 2017 to explore Paris, Toulouse and Carcassonne was not on my bucket list.  At least, I didn’t know it was! I had been to Paris twice, but both trips were many years ago. However, when I read the description of the Spirit Tours pilgrimage to France, I decided to go and explore part of France that would be new to me.


I signed up for this Spirit Tours trip, which was lead by Dr. Edward Viljoen (Senior Minister of the Center for Spiritual Living, Santa Rosa), because once again I was seeking spiritual exploration, community, and shared experiences. Having been on three previous trips with the Center for Spiritual Living, Santa Rosa, and Spirit Tours, I knew that all three considerations would be realized. Plus we would be staying in some lovely and charming hotels and eating wonderful French food!) (Note: Everyone’s food requirements were able to be met during the entire trip.) 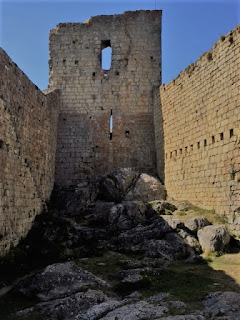 Spiritual Exploration:  The focus of this trip was on the plight of the Cathar people (who were considered heretics by the Christians), the sacred sites and areas where they dwelled and the divine feminine in the form of Mary Magdalene. Every day was filled with beauty, mystery, adventure and amazing experiences. 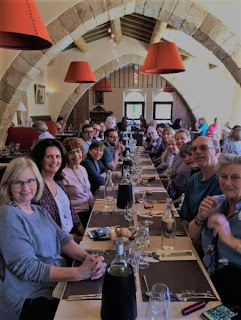 Community:  There were 20 interesting and adventurous people on this trip.  Most were from CSLSR with a couple “friends of” joining as well as a traveler from New Zealand who was quickly and completely adopted by our group.  Each morning we gathered in a circle for prayer, practice, sharing and we also received an overview of our upcoming day from our Spirit Tours leaders.  We were blessed to have Janet Pullen* as our guide, as she is an authority on the Cathars and the areas of Southern France where they lived between the 12th – 14th centuries.


Shared Experience: Each day the group visited Cathedrals, basilicas, museums, chateaus, and fortresses.  We learned about history, architecture, people and religious practices.  Our guides were graciously and generously available to us as we traveled around Paris and then on to Toulouse and Carcassonne.  Riding in two small vans gave us the opportunity to get to know our travel mates along the way.


Lovely walks – hikes, views, countryside, gardens, old houses in small villages...I wouldn’t change a thing about this trip as it was so well planned and guided. I hope you consider participating in the next one. Talk to me if you want a first-hand account!


By Chandra Farnsworth
*Janet Renu Pullen author of In Secret and Shadows  Discovering Light in the South of France
No comments:

There was a point in our masterfully facilitated Bali pilgrimage where I was reminded of the universality of story. Nestled in our gorgeous landscapes, Dr. Edward Viljoen narrated and magically brought to life important sections of the great epic Hindu poem – The Ramayana. Two scenes stood out to me – the first is when Rama, the avatar of Vishnu who is destined to become king, is instead banished into the forest. His response to the news is devoid of pity and blame and instead accepts the verdict with dignity, taking his leave.

The other was Manthara, the handmaiden who never stopped manipulating the King’s third wife Kaikeyi with her relentless gossip and calculated mental poisoning to get all that she could for herself.

We each have the dignity of Rama as well as the manipulative fear mongering of Manthara within us. Our life unfolds, and mental patterns are established based on which of these traits we become most devoted to.

What I witnessed throughout our time with Jim Cramer, William Abel, Evan Dow-Williamson, and Edward Viljoen, was pure Rama consciousness. Learning of Jim’s ceaseless years of gaining the trust of the Indonesian Temple authorities so those of us on the journey could be welcomed into temple ceremonies where typical tourist are not, was a remarkably unexpected and selfless gift for all of us to experience.

I was humbled by his devotion to the Balinese culture and the way in which we each benefitted from the ripple of effect of his decision. And like Rama, when there were criticisms, Jim never wavered from his dignity and did his best to accommodate demands.

Too, William, Evan, and Edward gave of themselves with such high-level courteousness that I cannot imagine an introduction to Bali with anyone else.

In times such as these, we are all called to bring to the light our inner Rama - not just on special occasions but as a way of life.

I am reminded of the quote, "How you do anything is how you do everything." I know that this trip fueled my devotion to allow everything within me to be like Rama.

I have had the great fortune of experiencing much of the world in my lifetime, but I have to say that this trip nurtured me deeply and I am grateful to Spirit Tours and the Santa Rosa team for this lasting treasure. My lasting, heartfelt thanks!

Join me in Costa Rica (January 15, 2018) and spend some time exploring the nature of this beautiful land, and also, the nature of your being. Yoga is about discovering your true nature, which is peace, and meditation is a method that is used to do it.

For people who have never practiced yoga, or for those who prefer a gentle approach, this tour is a great way to learn more about yoga and meditation. Gentle yoga uses classic yoga poses to help build balance, strengthen and flexibility to the body, with modifications to help make the practice accessible to any level.

Because meditation is an integral part of a yoga practice, time will be spent with different meditation techniques and instruction to help develop or deepen a practice. Even those who have difficulty with meditation can benefit from our time together in the peaceful setting of Costa Rica.

Spirit Tours is known for their authenticity, simplicity, flexibility, beauty and for going beyond the ordinary into the very heart of the cultures we visit. Our tours are life transforming experiences for all our tour members, no matter what your religious background or affiliation's are. Leading tours that are grounded in daily yoga or meditation in exotic destinations is our passion and joy! Come join us, we promise you won't be disappointed..